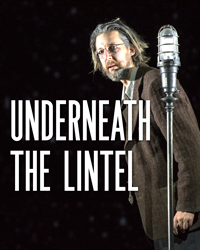 This production was originally performed in its French version at Théâtre du Nouveau Monde, in coproduction with the Segal Centre and the National Arts Centre, from September 9 to 27, 2020.

Set in a nearly empty theatre, rented for the night, Underneath the Lintel follows a librarian’s quest to unravel the mystery behind a book 133 years overdue. In show business tradition, the ghost light is left on to stand guard in deserted theatres for safety and superstition. When he arrives on stage, he turns off this light at last, a signal of hope that the theatre can finally come back to life and the space be filled with stories once more.

Underneath the Lintel premiered "Off-Broadway" at the end of September 2001. The playwright, who also directed and starred in the show, had to delay its presentation as New York recovered from the tragic September 11 attacks. Struck by the parallels between this theatrical hiatus and the global crisis we are currently living, Director François Girard affirms, “We will not be silent. We will tell our stories despite the pandemic.”