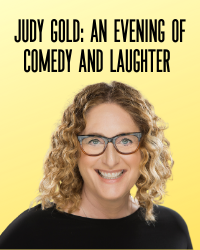 Don't miss this hilarious live evening of comedy live from Judy's home! Best known for her role as the star of her two critically acclaimed, long-running Off-Broadway hit shows: The Judy Show – My Life as a Sitcom (New York Times Critics' Pick) and 25 Questions for a Jewish Mother (GLADD Award, Drama Desk Nominee), she is also known for her acclaimed stand-up specials on HBO, Comedy Central, and LOGO, as well as for her appearances on The Late Show with Stephen Colbert, Broad City, Pop TV’s Nightcap, and the Showtime series, I’m Dying Up Here. She is also the host of the podcast Kill Me Now and was a writer and producer for The Rosie O’Donnell Show.

(Have credit on your Segal account? Yes, your credit can be applied to the purchase of a digital ticket!)

*Tickets can be purchased up until 10 minutes prior to the live stream start time.

**This ticket allows you to watch the LIVE stream performances on Thursday, January 28, 7:30 p.m. and will be available to view for 48 hours afterwards. Instructions on how to watch will be sent to ticket buyers a day before the event.